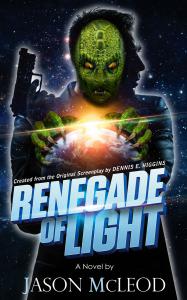 The Greatest Deception with which the Devil has Tricked Mankind was to Convince the World that He is God. 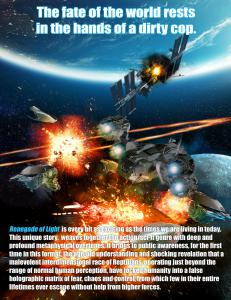 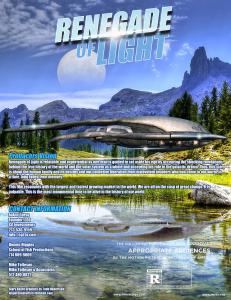 This is the story that will Light the World on Fire.

ROUND ROCK, TEXAS, UNITED STATES, September 10, 2019 /EINPresswire.com/ — Co-writers Jason McLeod and Dennis Higgins announce their new book “Renegade of Light", a metaphysical thriller that puts the readers at the edges of their seats as one man is guided to set aside his ego by accepting the shocking esoteric knowledge behind the true history of humanity and accepting his roll in the galactic drama where the human race is liberated from a malevolent invader who had come to earth in a time long faded from memory.

Corrupt police detective Danny Phelps is counting the five grand he just bullied off of a pair of low-level drug slingers when a strange beggar appears out of nowhere and asks for a handout. After telling the bum to buzz off, Phelps is shaken to his core by a series of dreadful clairvoyant visions revealing a mysterious underground base where eight-foot-tall Reptilians are torturing a young woman and terrorizing caged children.

When Phelps flashes back to his young brother’s dead eyes, it tears his guts up all over again. While working a missing child case, the enigmatic stranger keeps appearing in different guises in some of the most unlikely places. Phelps is unaware that the man’s sudden appearances coincide with a massive explosion of divine light originating from the core of the galaxy, light which is now mutating Phelps’ DNA so that he can evolve into the prototype for the next generation human with enhanced strength, speed, senses, intellect and the uncanny ability to travel multidimensionally into other realities.

As Phelps is progressively evolving, he learns that he has been chosen to be mankind’s leader against the child-sacrificing Reptilians and their human minions who have collectively infiltrated the highest echelons of power all across the globe.

Danny Phelps sees he has a chance for redemption. First, he has to cope with the horrifying truths about human history and the nature of evil. Then confront the mind-bending secret of the enigmatic man’s true identity. And finally, he has to become the Renegade of Light, enter the fourth-dimension and destroy the evil force enslaving mankind. Or die trying.

Renegade of Light is a reality-based work of science fiction that takes the reader on a metaphysical journey, where mankind’s fate rests on one man’s redemption.

If the Twilight Zone and Star Trek had drunken sex, this would be their love child.
For additional information or inquiries contact JoAnn Corso at 213 536-9159 or info@cgi-la.com or visit us at www.renegadeoflightofficial.com