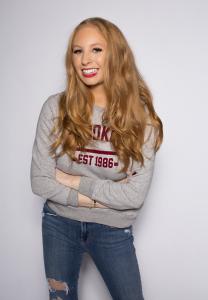 “I have been so lucky to have had travel be such a significant part of my life.” – Elizabeth Stanton

LOS ANGELES, CA, UNITED STATES, September 4, 2019 /EINPresswire.com/ — Elizabeth Stanton has been a world traveler her entire life, experiencing the culture of Europe, the wonders of the Far East, and the natural beauty of remote destinations. She started hosting “Elizabeth Stanton’s Great Big World” at the age of 15, and it was watched in 90% of the United States at its peak. The show featured several well-known stars and was filmed in places all over the world, from the USA to Nicaragua to Paris to Beijing. Now, the talented television host explains just what it is about travel that brings about such a positive influence in her life.

“I have been so lucky to have had travel be such a significant part of my life,” explains Elizabeth Stanton, “Not only is travel therapeutic, it creates purpose and adventure in our everyday life.”

It’s true. Many people use travel as a form of therapy, and can be used consciously as a way for self-discovery and transformation. Most of the times therapeutic effect of travel is treated by travelers as a by-product, as something that "happened" to them, but there’s more to the equation. Travel as therapy is a holistic way of travel: to consciously learn about yourself by going away from habitual and predictable environment with intention. It is to use power of a metaphor of journey to induce personal transformation.

Elizabeth Stanton has gotten to feel those experiences first-hand this summer. To gear up for her new project: hosting CW’s “Big Stage,” she took a trip throughout Europe in order to shoot episodes of the exciting new show as well as scout talent.

She travelled with a few of her celebrity friends, including Maiara Walsh (Desperate Housewives), Garrett Clayton (Star of Hairspray Live & Disney’s Teen Beach Movie), Jennifer Veal (Disney’s Jessie & Descendants), and Noah Mathews (True Blood). The trip took the group throughout the United Kingdom, Spain, France, Italy, and even Monaco. The four-week schedule was filled to the brim with destinations and tourist attractions, and was a life-changing trip for everyone involved. For Stanton, keeping busy and being surrounded by her family and friends has become a key component to keeping herself motivated and working hard.

“Travelling helps me learn lessons I will never forget, and also adds value to the journey of my every-day life,” concludes Elizabeth Stanton, “these lessons are priceless in the bigger picture of my life.”