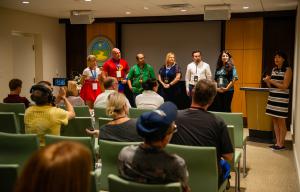 “There are plenty of great short films being produced by very talented film makers, they just need assistance … and this is why the Tampa Bay Humanitarian Film Festival was created.”
— Michael Soltero, Director of the CCV Center

CLEARWATER, FLORIDA, US, August 8, 2019 /EINPresswire.com/ — In anticipation of September 28th’s 2nd Annual Humanitarian Film Festival, the Clearwater Community Volunteers Center, (CCV) will host weekly short film screenings in their community center in downtown Clearwater. The screenings will help select the entries for the Festival. Volunteers have been gathered as a committee and will be viewing the films every Monday at 7PM in the CCV Center located on 133 N. Fort Harrison Avenue.

“There are plenty of great short films being produced by very talented film makers”, said Michael Soltero, Center Director, “they just need assistance in spreading their message, and this is why the Tampa Bay Humanitarian Film Festival was created; to give an opportunity to independent filmmakers to showcase their humanitarian message.”

The events are being done in keeping with what Scientology’s founder, L. Ron Hubbard wrote about the role of the artist in 1952, “The artist has an enormous role in the enhancement of today’s and the creation of tomorrow’s reality. He operates in a rank in advance of science as to the necessities and requirements of Man. The elevation of a culture can be measured directly by the numbers of its people working in the field of aesthetics. Because the artist deals in future realities, he always seeks improvements or changes in the existing reality. This makes the artist, inevitably and invariably, a rebel against the status quo. The artist, day by day, by postulating the new realities of the future, accomplishes peaceful revolution.”

Short films are still being sought; filmmakers can contact Michael at the CCV Center by calling 727-316-5309 or email ccvdirector@ccvfl.org. to get more information as to the submission of their film. The films are to highlight humanity, tolerance, understanding and appreciation for others. The films are to be between 10 and 20 minutes.

About the Clearwater Community Volunteers:

The Clearwater Community Volunteers have over 27 years of community service under their belt with over 150,000 families and children helped since their founding in 1992. Sponsored by the Church of Scientology Flag Service Organization, they stay true to their reputation of helping others with their center located on the corner of Fort Harrison Avenue and Drew Street in downtown Clearwater.