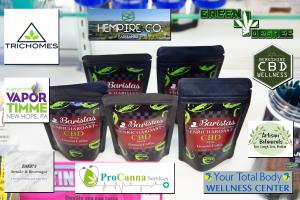 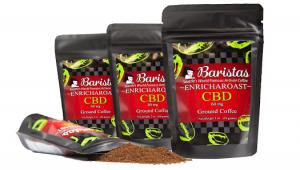 Baristas CBD coffee is by far the highest quality CBD coffee we have ever tried, and we are very glad to be carrying it. Baristas product is a must try for those who truly care about their coffee”
— Robert Gans – Trichomes

Nathan Walker CEO of Hempire Co. an Alaskan based company whose mission is to change the publics perception of all things Hemp commented: “The rich nutty taste and aroma of Baristas coffee paired with the benefits of CBD allow me to start my morning with a positive and focused energy boost. Our regulars love the taste and benefits of Baristas CBD coffee while experiencing the calming effects that CBD has to offer.”

Laura Sachs of Vaportimme added: “Vaportimme started in Pennsylvania 5 years ago with vaping as our main stay. Now we sell more CBD since it was legalized 3 years ago. We manufacture the CBD Tincture and Balm and we carry the best CBD Coffee in the industry. Baristas Coffee is by far the best, according to our clients who buy CBD on a regular basis.”

Robert Gans owner of Trichomes from Oklahoma City exclaimed: “Baristas CBD coffee is by far the highest quality CBD coffee we have ever tried, and we are very glad to be carrying it. Baristas has been very supportive of our business and the product is a must-try for those who truly care about their coffee.”

Barry Henthorn Baristas CEO stated: “Baristas products are now being seen on shelves and our distribution network continues to grow. We are very proud to welcome our newest distribution partners and look forward to supporting them and our other outlets in our new advertising set to kick off shortly.”

Unlike early more primitive attempts by others who tried to use CBD oil to infuse coffee which separates and sticks to the cup, or hiding the CBD in sweeteners or other impurities, the Baristas EnrichaRoast CBD Coffee uses Flower Powers proprietary technology, introducing CBD to the beans after they are roasted.

The media buys are made possible and were created via digital media frontrunner ReelTime Media (OTCPK: RLTR) www.reeltime.com whose capabilities are redefining how companies are evaluating and purchasing their TV, radio, print, and other new media. Baristas is now ready to support its new products and distributors with a marketing effort educating and driving consumers to consume Baristas historical products.

About Baristas Coffee Company: Baristas is a national Coffee Company that is recognized throughout the US. It currently produces and sells coffee related products under the Baristas brand. The Baristas White Coffee single-serve cups compatible with the Keurig 2.0 brewing system is the bestselling product in its category. Baristas also markets other coffee-related products. Baristas gained mainstream exposure when it became the subject of “Grounded in Seattle” the reality show special feature which aired on WE tv. It has been featured nationally including during Shark Tank on CNBC with Front Montgomery, CNN, ESPN, Food Network, Cosmopolitan Magazine, Forbes Magazine, Modern Living with kathy ireland, Sports Illustrated, NFL Monday and Thursday Night Football with Megs McLean, at NASCAR Races, The Grammys, NBA TV, and other notable media.