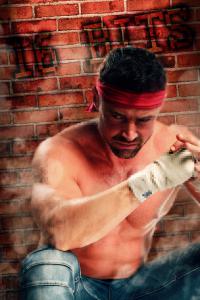 In 16 Bits, the lines between reality and video games blur when a lonely loser befriends a violent street fighter who emerges from an old 16-bit fighting game.

After a shocking divorce leads to a nervous breakdown, PHILIP decides to throw himself an old-school sleepover style party to celebrate his 40th birthday. Unfortunately, none of his friends show up to the party, and Philip winds up celebrating all alone…

To make matters worse, a local pizza joint pranks Philip by topping his pie with hallucinogenic mushrooms. When Philip eats the entire pizza on his own, the mushrooms send him on a wild drug trip while he plays the 16-bit video game HAZARD WASTER…

Under the influence of the mushrooms, and fueled by anger towards his friends, Philip plays HAZARD WASTER until his fingers bleed. The blood seeps into the game system and allows a 16-bit fighter, WAXX WASTER, to emerge into the real world…

Already bonded over their “game time” together, Waxx takes Philip out on the town for one unforgettable birthday. But after eating ice cream and getting matching tattoos, the innocent fun turns to extreme violence as Waxx and Philip start picking fights…

When the knockouts escalate to brutal murders, Philip has to decide where the game stops and reality begins. And what happens when you apply video game logic to a world of flesh and blood people?