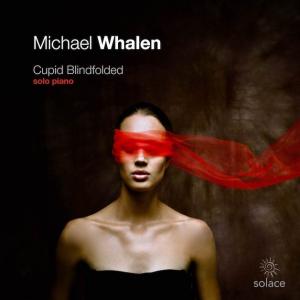 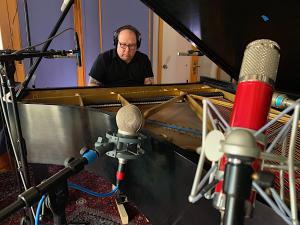 For the first time in 20 years, it’s just Michael, his melodies and a magical piano.

Making this album is the fulfillment of a dream…I am so excited about partnering with Real Music on Solace…The name Solace says everything you need to know about the intention of the music.”
— Michael Whalen

LOS ANGELES, CALIFORNIA, USA, July 12, 2019 /EINPresswire.com/ — Real Music and Solace jointly announce the July 12th release of Cupid Blindfolded by award-winning composer and pianist Michael Whalen. With hundreds of millions of streams to his credit, two Emmy awards, and a career spanning three decades, people everywhere have been moved by Whalen’s emotive heart-based music. The captivating new release, Cupid Blindfolded, is his first solo piano album in 20 years, reflecting upon the importance of deep listening…to the music, and the meaning behind it…to each other…and to the truth in one’s own heart. Relaxing and melodic, the title track released as a single on July 5th, the first release by Solace, Whalen’s new sub-label under Real Music, a newly-acquired division of Cutting Edge Group. Visit MichaelWhalen.com for more information and all music links.

Romantic, contemplative and dreamy, Cupid Blindfolded is a 10-song album filled with the gorgeous melodies and air that has made Whalen an internationally-celebrated recording artist and film composer. Recorded, mixed and mastered earlier this spring by Tom Eaton at Will Ackerman's Imaginary Road Studios, Cupid Blindfolded was recorded on the studio’s famed Steinway B in single, full takes without editing, while being simultaneously filmed by 6 cameras; Whalen debuted a mini-documentary called “The Making of Cupid Blindfolded” for his fans in May.

On July 5th, SoloPiano.com hosted the Exclusive Worldwide Debut of “Cupid Blindfolded,” a multi-camera video of Whalen’s title track performance, corresponding with the launch of the eponymous single. In the coming weeks, Whalen will announce a fan-focused social media campaign; follow him on Facebook (https://www.facebook.com/michaeljwhalen), Instagram (https://www.instagram.com/michael_whalen_music/) and Twitter (@mwhalenmusic) for the #CupidBlindfolded launch details.

“Making this album is the fulfillment of a dream and it represents a wonderful new era for my music,” Whalen commented. “I am so excited about partnering with Real Music on Solace. Having my own imprint label is a dream come true. The name Solace says everything you need to know about the intention of the music. After decades of creating recordings and content on my own, I am so happy to have a team of great people to create with, collaborate with and plan the future with. Cupid Blindfolded is the first of some really exciting music we’ve planned. I can’t wait!”

“Cupid Blindfolded marks the inaugural release for Real Music since our acquisition of the label, and this record represents the highest standards of quality, sincere creativity, and boundary-shaping artistic merit that has made Real Music the home to the most beloved mindfulness music around the world,” says Darren Blumenthal, President of Real Music. “We are looking forward to a bright future with Michael as our newest recording artist, and equally await the new artist signings that he will develop and release on his new Solace/Real Music imprint.”

The New York Times once wrote, “Michael Whalen’s music echoes in your soul…” and his return to solo piano is already resonating with music writers. Kathy Parsons of MainlyPiano.com, who interviewed Whalen extensively in June, shared her opinion, writing “With his first purely solo piano album since 1999, Michael Whalen returns to his “unplugged” roots and pours his heart into every note. Cupid Blindfolded will certainly stand as one of the best albums of the year as well as one of the best piano albums of the decade.”

Cupid Blindfolded is available for purchase in physical and digital formats at Amazon and other retailers, and will be streaming at Spotify, Pandora, Apple Music, Deezer and 200 other platforms worldwide on July 12, 2019.

About Michael Whalen: Known for his beautiful melodies and gorgeous textures, Michael has fused his expertise with sound design and his love of soaring cinematic melodies into a unique sound that has been loved since his first commercially-released music on Narada (Universal) in 1993. Michael is an expert on music copyrights, music monetization and is seen frequently on panels and on-line talking about the future of the music business. Michael has been adjunct professor at the Berklee College of Music, The City College of New York, NYU, The New School and now teaches at The Fashion Institute of Technology in New York. (MichaelWhalen.com)

About Solace
The new sub-label under Real Music, a newly-acquired division of Cutting Edge Group.