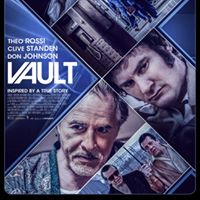 'VAULT' will hit select theaters on Friday, June 14, 2019, as part of a multi-platform release. The film was acquired by GRINDSTONE ENTERTAINMENT GROUP, A LIONSGATE COMPANY in January 2019.

VAULT is inspired by true events and tells the story of a group of small-time criminals, who in 1975, attempt to pull off one of the biggest heists in American history; stealing more than $34 million from the mafia in the smallest state in the union, Rhode Island. The film was directed by Tom DeNucci, co-written with B. Dolan. The cast includes Theo Rossi (Marvel's Luke Cage, Sons of Anarchy) as Duece; Clive Standen (Taken, Vikings, Everest) as Chucky; Emmy-winner Samira Wiley (Handmaid's Tale, Orange Is the New Black) as Karen, and Academy-Award nominee Chazz Palminteri (Bullets Over Broadway, A Bronx Tale, The Usual Suspects) as Mafia boss Raymond Patriarca, along with Golden Globe-winner Don Johnson (Django Unchained, Miami Vice) as Gerry. The producers are Chad A. Verdi, Nick Koskoff, Michelle Verdi, Matthew J. Weiss and Ryan Murphy, with Emma Tillinger Koskoff serving as Executive-Producer.

Arthur Bretnik played by Aaron Eckhart (The Dark Knight, Sully, Bleed For This) is a mentally unstable conspiracy theorist and private eye with a traumatic past. After
being hired to investigate a possible murder cover-up in the small town of Wander, Arthur is plunged into a world of lies and deceit, as he quickly suspects the murder may be part of the same 'conspiracy cover-up' that caused the death of his daughter. Increasingly paranoid, Arthur's sanity is tested as he attempts to filter fact from fiction and solve the case, all the while questioning if he is a pawn in a much bigger game.

MALEVOLENCE:
• Currently in pre-production in Rome, Italy
• Written by Chee Keong Cheung and Oliver Morran with Dolph Lundgren directing
Brandon Jones (Dolph Lundgren) is an undefeated underground fighter of exceptional talent who doesn't know how to lose – but he is ordered to do just that for a crucial high stakes fight. Failing to follow through on this command, a merciless punishment is exacted, resulting in the brutal murder of his wife and daughter and Brandon himself is left brain damaged, a shadow of the man he once was. With the help of his best friend and trainer, Dutch, Brandon must rebuild himself mentally and physically to take revenge on those that tore his family apart and left him for dead. In his way stand a cartel of cold-blooded fighters, a corrupt police force headed by Detective Cain (Scott Adkins), and the limitless resources of mob boss Vincent, a ruthless and twisted individual, who holds sway over the city. As Brandon exacts his revenge, leaving a trail of devastation and destruction in his wake, he comes to realize that all is not what it seems, and what he once feared lost may prove to be his salvation.

Undisputed gives us a ringside seat inside the mind of a legendary fighter.

JUNGLE ROOM:
• Jungle Room will start pre-production in early 2020 and be filmed in Rhode Island and Boston, Massachusetts
• Tom DeNucci will direct from a script he penned with B. Dolan and Matt Weiss
• Chad and Michelle Verdi will produce alongside Nick Koskoff, with Chad Verdi Jr. serving as executive producer

In a near-future where negative impulses are monitored and brain chemistry is under
constant surveillance, a down on his luck "Reality Writer" becomes fascinated with a
violent new game.

VAULT
The Irishman
Bleed For This

Disclaimer/Disclosure: Investorideas.com is a digital publisher of third party sourced
news, articles and equity research as well as creates original content, including video,
interviews and articles. Original content created by investorideas is protected by copyright
laws other than syndication rights. Our site does not make recommendations for purchases
or sale of stocks, services or products. Nothing on our sites should be construed as an offer
or solicitation to buy or sell products or securities. All investing involves risk and possible
losses. This site is currently compensated for news publication and distribution, social media
and marketing, content creation and more. Disclosure is posted for each compensated news
release, content published /created if required but otherwise the news was not compensated
for and was published for the sole interest of our readers and followers. https://
www.investorideas.com/About/Disclaimer.asp
Contact management and IR of each company directly regarding specific questions.