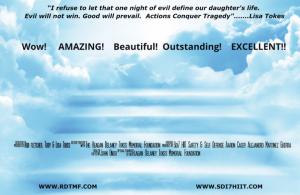 A tragic story turned into an empowering message of strength, faith, hope, courage and love. 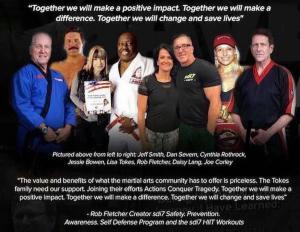 Lisa Tokes with Rob Fletcher gathering an army to educate, raise awareness and teach safety and self defense

A tragic story with a very empowering message, mission & purpose. “Evil will not win. Good will prevail. Actions Conquer Tragedy" .

I refuse to let that one night of evil define our daughters life and legacy. Evil will not win. Good will prevail. Actions Conquer Tragedy”
— Lisa Tokes

The trailer highlights a story that is every parent’s worst nightmare. On February 8, 2017, 21-year-old Ohio State University student Reagan Tokes was robbed, raped, abducted and murdered. Before being shot twice in the head, Reagan’s final words were “I just want to live.”

The story of Reagan’s parents, Lisa and Toby Tokes, is emotional and compelling. They deliver an empowering message of strength, faith, hope, and courage – most importantly, of love – as they move forward in fighting the system, laws, and policies that failed them. Their daughter’s life and legacy will be defined by “Actions Conquer Tragedy.”

Says Executive Producer Rob Fletcher, “This story, which we hope is picked up by a production company or producer, is powerful on so many levels. These parents define themselves after tragedy took away their most precious gift. How the Tokes have the strength to hold on is amazing. They chose to fight, make a difference and save lives. Lisa and Toby selflessly sacrifice to prevent a similar horror from striking another family.”

Reagan’s murderer was a violent criminal who was released from prison early, in spite of committing 52 infractions while incarcerated. He was released with a GPS ankle bracelet that was not monitored. Prior to murdering Reagan, he violently victimized six other people. Lisa and Toby Tokes believe their daughter’s murder was entirely preventable. Instead of taking time to grieve, they took action and brought to fruition the Reagan Tokes Act which gives state prison officials the ability to take an offender’s prison record into account when deciding to release or retain the individual behind bars and also require formal guidelines for parolee monitoring.

Lisa Tokes says, “This is a journey I wish I was never on. However, I refuse to let that one night of evil define our daughter's life. This is what we must do. This is what Reagan would want us to do. Evil will not win. Good will prevail.” As a result, the Actions Conquer Tragedy movement was born.

Actions Conquer Tragedy represents the ongoing effort to fix flawed laws and policies and also educate and train on safety and self-defense. Rob Fletcher is a recognized self-defense and combative tactics expert who offers programs in schools and businesses across the country. Reagan’s story touched him to the core, and he now partners with Lisa Tokes in presenting these programs. His signature program, sdi7 HIIT (self-defense in 7 minutes high intensity interval training), is gaining attention and momentum, raising awareness and teaching self-defense and how to protect others. “Crime, violence, active shooters will never go away.” Rob’s mission is prevention and saving lives.

The Actions Conquer Tragedy movement is real. The Reagan Tokes gala, now an annual event, raises money for a scholarship foundation that bears Reagan’s name. Another annual event is the sdi7 HIIT Safety & Self-Defense Conference that brings together law enforcement, military, martial arts, fitness, and special ops professionals to deliver information and expertise in the areas of safety, prevention, awareness, fitness, and self-defense, including weapon disarmament, learning how to fight back and where and how to strike, and active shooter detection and response.