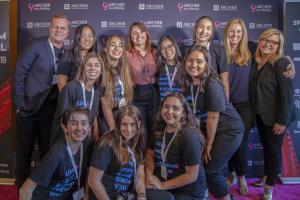 I'm proud to support Archer's Film Festival and their vision to build the next generation of diverse leadership in the industry.”
— Victoria Alonso, Marvel Studio Executive

As a Latina and a female senior executive, Victoria Alonso has become a strong voice in Hollywood and a tireless advocate for progress. She was the Executive Producer of "The Avengers" in 2011 and has since served in that role for many major Marvel movies, including "Captain America," "Black Panther," and the recently released "Avengers: Endgame." Alonso opened the event with a keynote and interview led by students from Archer’s Institute for Film and Video Literacy program.

“Art strives to inspire, educate, and influence its audiences, and filmmaking might be the most powerful medium within that landscape,” Alonso said. “Watching a film can give you an opportunity to walk in someone else's shoes and learn about someone else's story, even if it's only for a little while. Because of this, it is imperative that all voices are heard, all people are represented, and all stories are told – both in front of and behind the camera. I'm proud to support Archer's Film Festival and their vision to build the next generation of diverse leadership in the industry.”

The Archer Film Festival is a student-run and student-led event.

"There are many reasons why we are incredibly excited to include Victoria Alonso in this year’s festival, but what stands out to me most is her fearless commitment to inclusivity on both sides of the camera,” Film Festival Leadership Board member and Archer senior Zoë Appelbaum-Schwartz said. “In shaping the Marvel cinematic universe, Ms. Alonso has become a ‘superhero’ in her own right, tirelessly advocating for progress while demonstrating an exceptional commitment to her art. As a remarkably well-respected and influential Hollywood producer, Ms. Alonso is a fantastic role model for any aspiring female filmmaker.”

Learn more about the event at archerfilmfestival.org. View photos and updates at @archerfilmfest on Twitter or Instagram.

Nearly 20 years later, the gender gap remains unchanged. According to a 2018 report from the Center for the Study of Women in Television and Film, women comprised 20% of all directors, writers, producers, executive producers, editors, and cinematographers working on the top 250 domestic grossing films. This represents an increase of 2 percentage points from 18% in 2018 and is virtually unchanged from the percentage achieved in 1998. Only 8% of last year’s top-grossing movies had a female director, down 3 percentage points from 11% in 2017.

The Archer Institute for Film & Video Literacy program strives to overcome these gaps by encouraging the new generation of female filmmakers through its film classes and the Archer Film Festival. Each year, participants get the rare opportunity to screen their films at the festival and learn from high-level industry professionals. Throughout the development of the Festival, student filmmakers are given access to insider industry knowledge, further strengthening their foundation to effectively pursue careers in the field.

"The Archer Film Festival was created to encourage our student filmmakers, give them hands-on experience in the industry, and to help achieve gender parity in front of and behind the camera,” Head of School Elizabeth English said. “Archer students have run with this idea, making the Festival their own and bringing exposure and attention to a problem that affects the way young girls see themselves and their place in the world."

About The Archer School for Girls
Founded in 1995, The Archer School for Girls is a contemporary girls’ school, grades 6 through 12, devoted to educating and empowering girls for leadership in the 21st century. We take a research-based approach to teaching and learning in an environment that explores and refines the ways girls learn best. Archer has always been committed to reflecting the face of Greater Los Angeles. Forty-two percent of the student body are students of color and come from 73 different zip codes and 141 different feeder schools. We award nearly $4 million in financial aid annually. Above all, Archer is known for its highly innovative programs and joyful culture. For more information, follow us on Facebook and Twitter @ArcherSchool, Instagram @ArcherSchoolforGirls, or visit our website www.archer.org.