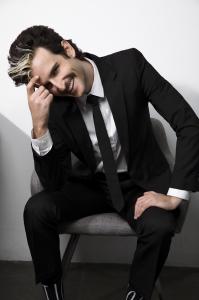 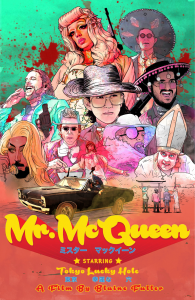 With a hundred gallons of blood, thousands of dollars of neon signs, & a bushel of drag queens, we shot Mr. McQueen in the outskirts of Los Angeles…”
— Filmmaker, Blaine Fuller – creator of Mr. McQueen

LOS ANGELES , CALIFORNIA, UNITED STATES, April 9, 2019 /EINPresswire.com/ — Rock n roll band, Tokyo Lucky Hole, has been accepted to compete in the music video category at the annual Newport Beach Film Festival (April 25-May 2) for their single “Mr. McQueen”, created by filmmaker Blaine Fuller. Fuller has brought the band's glam rock and psychedelic flare to life in the making of this short film/music video about three disco cowboy bandits that are pursued by a group of ruthless assassins in an acid western landscape. Their music video will play on May 2nd at 8:30 pm at Triangle 6 Cinema at The Triangle 1879 Harbor Blvd, Costa Mesa, CA 92627.

"With a hundred gallons of blood, thousands of dollars of neon signs, and a bushel of drag queens, we shot Mr. McQueen in the outskirts of Los Angeles in the same locations as Faster Pussycat, Kill Kill! and Fear and Loathing in Las Vegas,” says Blaine Fuller, writer, director and of Mr. McQueen.

Along with the blood and neon signage, the video features cafe racer motorcycles, vintage muscle cars, and costumes straight out of an anime. It was shot in the deserts surrounding Los Angeles and features Supernatural star Jeffrey Vincent Parise.

Fuller is available for interviews in person at the festival or over the phone.

About Tokyo Lucky Hole
Tokyo Lucky Hole is a rock n roll band from Huntington Beach, CA comprised of Clay Fuller, Ben Bridgford, and Russell Frankston. The band incorporates spaghetti western licks, satirical lyrics, and schizophrenic compositions into their music.Their sound pays tribute to glam rock & psychedelic rock from the past and disrupts modern-day sounds with flare and style. Mr. McQueen is their self titled debut album and available on all platforms online.

About Blaine Fuller
Blaine Fuller is a filmmaker, photographer, poet, and genius. His photos and writing have been published in Forbes, Business Insider, Entrepreneur, Huffington Post, amongst many other publications. He likes to pet dogs and read comic books in his free time. The best way to get to know him is over a bowl of ramen.