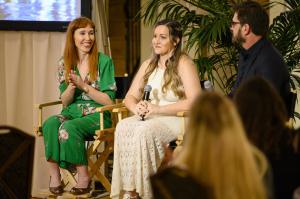 'Overdosed' is a story of a small town, but thousands of towns across the country fell victim to the same fate. It's a small-town-story that hints at the bigger picture.”
— Mary Sue Connolly, Director of "Overdosed"

CLEARWATER, FLORIDA, US, February 21, 2019 /EINPresswire.com/ — The opioid crisis was in the hearts and minds of the 100 people who attended a special screening of the documentary “Overdosed” on February 9th at Clearwater’s Fort Harrison. The documentary is a tour-de-force by director Mary Sue Connolly, which looks behind the startling figures of opioid abuse in West Virginia and the root causes of the crisis.

“I lost my beloved nephew to an overdose,” said Mary Sue Connolly, the director of the film. “This loss awakened me to an immense problem across the country and I was determined to find out what gave rise to this deadly scourge. As I said to my sister at the time; ‘I will keep walking over the hot coals of West Virginia until I find out what happened to Paul.’”

At the same time, Kammie Lynn Markwood, (who is featured in ‘Overdosed’), was experiencing the scourge first-hand. After suffering from addiction and turning to dealing, it was her own near-death by overdose that showed her she needed to change her life and re-make her community.

“Before the pill mills arrived, West Virginia was warm summer nights, bonfires, fishing, camping, ATV riding, lots of dirt and laughter,” said Markwood. “We were a hardworking, fun loving, happy group of people. But now, this is not the place I grew up. This is not the place I once loved – I stay because I have so much family here – including siblings, nieces, a nephew, and cousins – who can’t leave. Since I can't move them, I am determined to do everything in my power to give them a better, safer future.”

Markwood has since founded West Virginians for Change and is helping addicts get into rehab. Both Markword and Connolly first ran into resistance, but this did not stop them from moving forward.

“Making the film was a risky endeavor,” said Connolly. “We found ourselves in compromising situations, but there was never even a flicker of doubt about what we had to do. Overdosed is a story of a small town, but thousands of towns across the country fell victim to the same fate. It's a small-town-story that hints at the bigger picture.”

After screening the film, Connolly and Markwood joined their executive producer for a Q and A about the making of the film. One question was how will others be able to see the film?

Connolly and the film’s producers will continue to make the film festival circuit with ‘Overdosed’ and will then distribute the film on other channels. Residents in Pinellas County will be able to see the film at 4:00 on March 31st at Blur in downtown Dunedin, as a special presentation by the Dunedin International Film Festival.

The Fort Harrison is the international religious retreat for the Church of Scientology Flag Service Organization.

“We were very proud to show this film,” said Lisa Mansell, the Public Affairs Director for the Church. “Humanitarian L. Ron Hubbard wrote, ‘Research has demonstrated that the single most destructive element present in our current culture is drugs,’ and we see evidence of this every day. Educating others on this issue is something that we can do to help."

To learn more about future screenings of ‘Overdosed’, or to schedule a screening in your area, please go to https://www.overdosedfilm.com/.

ABOUT THE FORT HARRISON

Since completing construction in 1926, the Fort Harrison has been the home to many events for charitable organizations. The latest owner, the Church of Scientology, completed a top to bottom restoration of the Fort Harrison in 2009, and since then has hosted over 400 community events there. Scientology is an applied religious philosophy, founded by L. Ron Hubbard. The Church makes its facilities available to non-profit groups as a service to the community.