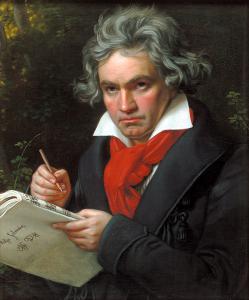 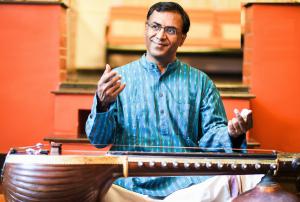 Sliding up – Ravikiran unveils Fur Elise on the 21-string Chitravina

PHILADELPHIA, USA, January 27, 2019 /EINPresswire.com/ — Chitravina N Ravikiran, acclaimed as the ‘Mozart of Indian Music’ as much for his prodigious entry at the age of two as for his artistry and inventive creations, unveiled a new Indian Classical raga in honour of one of the champion composers in Western Classical, Ludwig van Beethoven (1770-1827). The Sanskrit name of the raga, Veetavanam – suggestive of the name of the immortal composer – lends itself to multiple translations such as “desired abundance”, “desired spring” or “desired forest”. It forms the improvisatory prelude in Ravikiran’s latest video, Beethoven on 21 strings which features the ever-cool, evergreen Fur Elise. The audio will be available at a number of popular outlets including iTunes, Apple Music and CD Baby.

Ravikiran’s creation, close to the Western minor scale that Fur Elise is composed in, draws from the Indian raga Keeravani with a recognizable sequence of ascending and descending notes:

“Fur Elise actually uses several other phrasings and also every one of the 12 notes in a descending flourish at one point”, acknowledges Ravikiran, who has created a number of other ragas including Mohini, celebrating Mahatma Gandhi and Choodamani, named after his mother when he was two. “Technically such phrases will be considered as ‘special usages’ or ‘guest notes’ in Indian music and only used sparingly. This raga is more a suggestive salutation to the great composer than an attempt to mimic him. I hope that this tribute is welcomed by musicians and music lovers of both the East and West”. The presentation has already won plaudits from pundits in the West.

Maestro Andrew Sewell, conductor of Wisconsin Chamber Orchestra was ecstatic. “It’s a beautiful arrangement with delicate moments unique to the sounds of the Chitravina!”

Ravikiran, perhaps the first frontline slide player in the world and the first prominent Indian musician to record Beethoven’s Bagatelle No 25 has a number of other firsts and only-s to his credit both as a performer and composer. He has composed for and collaborated with orchestras and artists of diverse genres and countries since 1987. "But I never considered presenting an entire Western Classical solo piece before. The incomparable intuition and international adaptability that rigorous training in Carnatic music bestows empowered me to try Fur Elise.”

New York based Rhythm-Vocalist Loire Cotler makes a special reference to the virtuoso’s ‘brilliant and soulful reimagining that sets a timeless melody into a new and glorious sonic stratosphere’.

Ravikiran also brought to focus the challenges involved. “Even melody sections that may seem elementary on a piano (since 10 fingers are used) can be enormously challenging to negotiate with just one slide. But the ‘singing’ quality of the Chitravina and its ability to execute enchanting micro-tonal nuances as well as create what The New York Times once described as ‘dazzling effects’ can bring out a completely different flavor of the piece, without affecting its integrity.”

Vanitha Suresh, Director of the Melharmony Foundation (www.melharmonymusic.com) that catalyzed the production said, "This is a momentous endeavor for us that can create new audiences for Western classical too. Fur Elise can now be enjoyed by a number of Indian Classical lovers who may otherwise have not been aware of such brilliant creations."

Thanking the dedicated production team, Ravikiran emphasized that the positive power of music had the potency to unite people irrespective of race, region, religion or other separators.