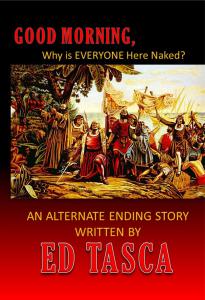 GOOD MORNING, Why Is Everyone Here Naked? an alternate ending adventure from author, actor, comedian Ed Tasca promises to give readers a hero's welcome . . .

People become humorists because the job market for roofers is so overcrowded.”
— Ed Tasca

NEW YORK CITY, NEW YORK, UNITED STATES, January 5, 2019 /EINPresswire.com/ — Ms. Donna L. Quesinberry, CEO – President and Founder of DonnaInk Publications, L.L.C. announced representation of author Ed Tasca and shares: "Mr. Tasca's nonsense humor is highlighted in the unique project, “GOOD MORNING, Why Is Everyone Here Naked,” showcasing wordsmithing that is a delight for book lovers of all ages. Ed charms readers by brandishing his satirical pen coupled with zany illustrations. As a small woman-owned Indie publisher, DonnaInk Publications, L.L.C. is heartened to publish Mr. Tasca's newest book. Slated for release formerly, we are delighted to have the capability to present Ed’s work to readers in the current hour."

About the Book: here's Columbus's famous, world-changing journey across the Atlantic, where you get to help Columbus by choosing where to go and what to do. It's a wacky adventure based on the fortunes, good and bad, endured by Columbus and his valiant crew, a strange collection of all the zany types who might have joined Columbus and his dangerous unpredictable journey. The pages are not chronological, so you have to follow the page code prompts at the end of each section to get you to where you want to go. In the end though, if you make the right calls, you, the reader, come out a hero. There is nothing else like this little book of humor on the scene anywhere.

About the Author: originally from Philadelphia Pennsylvania, Ed is an award-winning humor writer currently residing in Ajijic, Jalisco, Mexico. As a successful actor, author, columnist, humorist / comic, playwright and screenwriter, he has also published multiple works of fiction – most are comic novels or novellas. He has been published in Australia, England, Canada, Italy, Mexico, and the United States. And he currently writes a humor column for The Guadalajara Reporter, Mexico's largest English-language newspaper. He has often said, “People become humorists because the job market for roofers is so overcrowded.”

“GOOD MORNING, Why Is Everyone Here Naked?” is being released in the first quarter of 2019 in Blockchain, eBook, and print. Pre-ordering is available at the current time through AMAZON. Mr. Tasca’s book is also being shared through Barnes and Nobles and other distributors. For fact and/or sell sheets, write to verylittlebookstore@gmail.com.