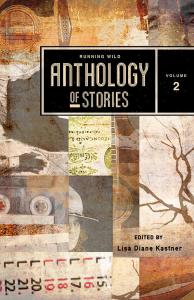 Running Wild Press has had an impressive year. Nominated for several awards, the founder is excited to be included in gift bags to Golden Globe nominees.

LOS ANGELES, CA, UNITED STATES, December 28, 2018 /EINPresswire.com/ — In their third year of publishing, Running Wild Press has had an impressive year. Already nominated for several awards including the Pushcart Prize, the executive editor, Lisa Diane Kastner, is excited for two of the press’s books to be included in gift bags to 2019 Golden Globe nominees and presenters. The bags will be gifted to actors, actresses, and presenters for the 2019 Golden Globes the weekend of January 7, 2019.

“When we were informed that both ‘Frontal Matter: Glue Gone Wild’ and ‘Running Wild Anthology of Stories, Volume 2’ would be included in the gift bags, I couldn’t be more thrilled,” said Lisa Diane Kastner, Founder and Executive Editor of Running Wild Press. “This is the perfect tribute to our authors, our readers, and the stories of 2018 as well as a gorgeous beginning to 2019.”

Lisa founded Running Wild Press with the vision to bring great stories and great writing that do not fit neatly in a box to readers worldwide.
“In 2018, we published nine books with stories ranging from personal narratives to cross-genre fiction and non-fiction,” said Lisa. “These two books represent a great compilation of our narratives.”

Never one to shy from an opportunity to feature talents who don’t necessarily fit in mainstream media, we chatted with Lisa about the press, the Golden Globes, and anything else we could fit in.

How Did You Get Into The Golden Globe and Screen Actors Guild Awards Gift Bags?
A dear friend reached out to me and mentioned that there was an opportunity to be included. There are only a handful of companies authorized to provide gift baskets for events such as the Golden Globes, the Emmys, the Grammys, the Oscars, and SAG Awards. I figured, heck, can’t hurt to have a chat. That chat resulted in our stories being included in 50 gift bags for both Golden Globe nominees and presenters as well as SAG Award nominees and presenters. We couldn’t be more excited. Only a select few are invited to be included in these baskets so this truly is an honor.

Who Among the Recipients Are You Most Excited to Meet?
Admittedly, I doubt that I’ll personally meet any of the celebrities or nominees during the weekend of the Golden Globes or the Screen Actors Guild Awards, but I am incredibly excited to have the likes of Bradly Cooper, Lady Gaga, Spike Lee, Constance Wu, Charlize Theron, and Lin-Manuel Miranda read these amazing stories.

I have admired Bradley Cooper’s rise and strategic choices for years. Lady Gaga continues to broaden and expand her repertoire. Her ability to tap into her own meager beginnings in “A Star Is Born” was truly breathtaking. Spike Lee’s true gift to bring forth real life situations and demonstrate their relevance to today’s society is beyond phenomenal. Constance Wu and the rest of the cast of “Crazy Rich Asians” not only brought theatrical houses down but showed the world how a Rom-Con should be done. And Lin-Manuel’s gifts for storytelling – no matter the form (Have you seen his Twitter account? Oy!) continues to inspire. I could go on and on. Needless to say, we’re proud to have these stories in such amazingly talented artists’ hands.

What Inspired You to Start Running Wild Press?
I had spent over a decade studying the art of storytelling from New York Times Bestsellers, such as Jonathan Maberry, Alexander Chee, Porochista Khakpour, Da Chen, Pulitzer Prize nominees such as Luis Alberto Urrea, National Book Award winners such as Julia Glass, Ha Jin, and PEN Award winners such as Percival Everett. I studied fiction, non-fiction, memoir, journalism, screenplay writing. Each experience and interaction brought greater knowledge and understanding.
I ran several writers workshops including Running Wild Writers Community out of Rittenhouse Square, Philadelphia. I often found writers whose writing was on-point – truly magical stories with great writing; the pieces simply needed a little tweaking. I gave the authors feedback and recommended that they send the pieces out for publication. I checked with each one and was often shocked when they said they couldn’t find home for their work. When I asked why, they informed me that the publications said the author’s writing was wonderful but didn’t quite fit. The more I heard this, the clearer it was that tons of great stories with great writing simply don’t fit into the mainstream media. So, I created Running Wild Press for great stories and great writing that don’t fit neatly in a box to find worldwide audiences. I’ve been humbled by the public’s enthusiastic response to our stories. We’ve been nominated for several “Best of” collections, the Pushcart Prize, and several more honors that are currently in the works.
To find out more about Lisa and Running Wild Press, go to www.runningwildpress.com or call 610-235-9626.
Our Golden Globe Press Kit is now available. Link didn’t work? Copy and paste this URL into your browser: https://app.box.com/s/q8z5xrg9r0zfriv9q08uc06qpeygxqou
Previous articles about Lisa Diane Kastner and Running Wild Press include:
• Small Town Gal blog: Editor Profile – Lisa Diane Kastner
• JMWW blog: Running Wild: An Interview With Lisa Diane Kastner By Curt Smith
• Lisa Haselton’s Reviews and Interviews
• The Speculative Fiction Cantina
• Books Chatter blog
• Littsburgh
• Additional audio interviews are available on Soundcloud